There may be a couple of glaring issues but NBA 2K18 is still an undeniably fun game at its core.

2k Sports has offered us the crème de la crème of basketball video games for many years and they don’t look like slowing down any time soon.

NBA 2K18 is the newest title on the shelf and offers us further proof that this developer simply can’t be beat within the genre – not yet at least.

Complete with impressive graphics new game modes serious depth and addictive gameplay it’s one of those games you can play for hours on end.

Whether it’s dunking on friends with Kevin Durant or swatting shots like flies with Anthony Davis NBA 2K18 brings everything you ever wanted to the basketball genre on console. 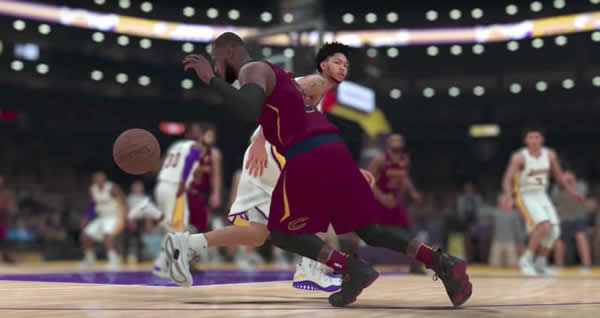 NBA 2K18’s predecessor NBA 2K17 had a few hiccups in terms of animations and gameplay but the latest edition smoothed everything out to give the game a much more fluid and organic feel.

The new “Neighbourhood” is the most interesting new feature giving you an open-world environment through which you can access everything to do with MyPlayer – including MyCareer MyPark Pro-Am and more.

The Neighbourhood is kind of cool but it’s also kind of gimmicky. It certainly adds a fresh flavour to the single-player modes but it makes everything take ten times longer than simply navigating a menu.

The most obvious downfall of the game is its relentless push for microtransactions something which could prove 2K Sports’ undoing if they don’t reel it in before releasing future titles.

Despite the fact the game is not free to play or even cheap NBA 2K18 flogs microtransactions so hard it has left a foul taste in the mouths of many fans. Indeed apparently spending $80 to $100 on a game isn’t enough of a financial commitment.

Don’t worry because you don’t need to spend the money to enjoy the game – 2K Sports just really shoves it down your throat. Almost every game mode is infected with opportunities to speed up progress by spending more money.

The second major issue is the prevalence of cutscenes in the solo career mode. It’s clear they’ve made an effort to add a very personable narrative to it but just let me play the game for goodness sake.

I could have sworn I booted up the game and sat through half an hour of cutscenes and jogging around the Neighbourhood until I actually played any basketball.

Also I really wanted to add “creating the ugliest possible character” to the list of top features but the customisation options are really limited – at the beginning at least.

But in terms of gameplay there’s no doubt it’s a joy to hit the court as a team player or manager. Plus it’s fairly easy to pick up and play right off the bat.

Don’t worry though: the skill ceiling is high enough that you can knuckle down master all the moves and become an unstoppable force.

The nitty gritty stuff – gameplay graphics and various modes – is all on point. If you pick up this game you won’t regret it.

If You Looking For An Good Place To buy NBA 2K18 MT Then We Mmocs.com The Best Choice For You To Purchase Cheap NBA 2K18 MT. Since 2011 We Have Been Doing Business Of Many Game Gold With Good Fame. Our Website Have Been The Reliable Coins Provider Of Many Buyer. If You Have Been Tird Of Loosing Face To Your Friends Why Not Come To Our Website? Buying NBA 2K18 MT Could Help To Build Your Own Need All-Star Team And Beat Your Competitors. You Can Always Get Cheaper NBA 2K18 MT Securely. So Why Need To Wait? We Provide The Cheapest NBA 2K18 MT On All Of The Platforms: Playstation 4 Playstation 3 Xbox One Xbox 360 And Pc. Meanwhile We Have All Kinds Of Delivery And Payment Ways For Your Convenience. We Think That Our Many Years Of Selling Experience Could Help Us To Give You The Best Service. Should You Have Any Questions Please Contact Our Website Support Who Is 24 Hours Online.